The sun is the fastest-growing energy source in the world. If the trend continues, up to 30 per cent of the world's electricity needs can be met by solar energy by 2040. This has renewed Statkraft's interest in investing in solar power.

A sharp reduction in the cost of producing solar panels coupled with an increasing demand for renewable energy means that solar power is now growing faster than any other energy source. The International Energy Agency IEA confirms this in its latest report on renewable energy, Renewables 2017.

"Investors don't invest in solar and wind because they want to appear green; they do it because it's financially profitable."

China is the clear leader in both production and use of renewable energy, and solar power has become both fast and inexpensive to develop. Serious problems with air pollution in many cities, and increasing energy needs resulting from its growing population and prosperity, has led to China already accounting for half of the demand for solar energy.

In the coming years, the need for renewable energy from water, wind and solar is expected to increase sharply worldwide. The IEA believes solar power will continue to dominate this growth, and expects the development of solar power plants to surpass both hydropower and wind power by a good margin.

Statkraft has been cautiously assessing solar power for a few years, but is now fully committed. In the report Low Emissions Scenario 2018 Statkraft estimates that solar power will grow strongly and account for 30 per cent of power generation globally by 2040.

Naturally, Europe's leading producer of renewable energy wants to be part of this growth. As a first important step on the way into this market, Statkraft built a solar park in Emmen in the Netherlands, in full operation since February 2018. The experience gleaned from this will be very useful for further investment in Europe and elsewhere.

The Lange Runde solar park in Emmen covers an area equivalent to 25 football pitches, and annually produces almost 14 GWh. This corresponds to the electricity requirements of 4,000 Dutch households.

"The plant was in full operation from day one. Thanks to the exceptionally sunny summer, production was about 25 per cent higher than expected."

According to Willemien van den Hoogen, the experience gained from Lange Runde, and the promising outlook for solar energy in general, provide good arguments to invest further in the Netherlands. The Dutch have so far had low production of renewable energy, and the country has no access to hydropower resources. Wind turbine development has also been slow, although ambitions have been high. It makes the Dutch hungry for sun.

"The Netherlands has been behind on the EU's target of a 14 percent renewable share by 2020, so they need to get up to speed. Therefore, we see a boom in solar energy in the Netherlands right now. Statkraft is determined to participate in this growth, says Van den Hoogen. 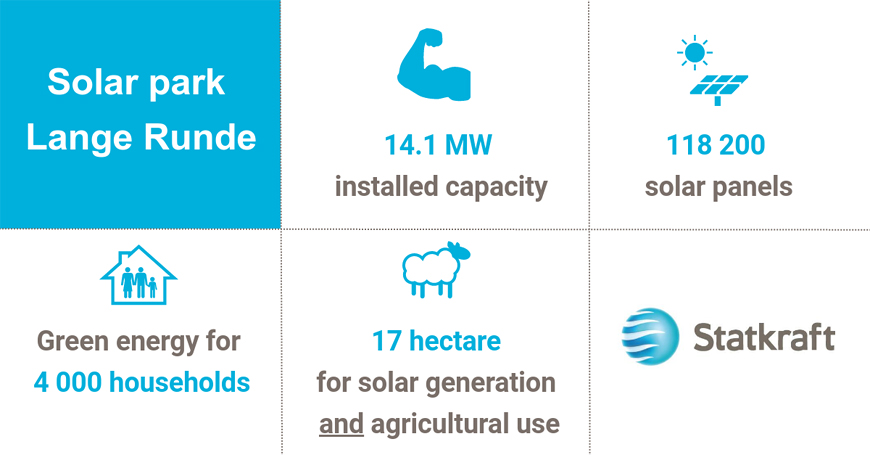 Statkraft aims at strong growth in the development of both solar and wind power in several other countries as well.

"Solar energy will definitely be important in the future. In addition to the fact that solar panels have become far cheaper in recent years, there is also less local resistance to solar parks than wind farms," says Van den Hoogen.

There is a market for solar power systems in many sizes, from small private plants on rooftops to huge parks with endless rows of solar panels. Statkraft will primarily invest in medium-sized solar parks and solar panel systems connected to commercial buildings. This is where profitability is highest and risk lowest. Statkraft will not own the plants alone. The strategy is to invest in early development and construction, then sell the majority interest to a long-term investor.

"By selling us partly out of finished projects, we secure funds to build new plants, while signalling our long-term commitment to solar energy by retaining an ownership stake," says Willemien van den Hoogen. 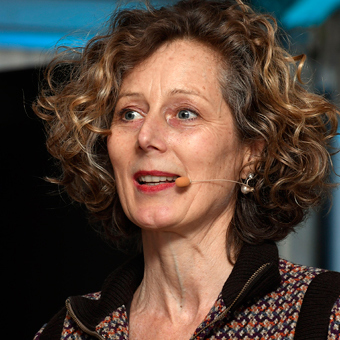 Willemien van den Hoogen is business developer in Statkraft's Solar Development unit, based in Amsterdam, the Netherlands. The unit is part of the company's European Wind and Solar business area. The Lange Runde solar energy plant in Emmen is built on farmland, and it is planned to use the grassland under the solar panels for sheep grazing. This solution prevents loss of valuable agricultural land to power generation. In addition to this type of multiple-use scenario, Willemien van den Hoogen believes that future projects will involve hybrid parks, where solar panels and wind turbines are located on the same site.

"Solar and wind are two renewable sources that produce electricity under different conditions, so we think it's a good idea to build these facilities together – both to save space and to optimize the grid capacity," says Van den Hoogen.

A weakness of renewable energy sources like the wind and sun is the lack of opportunities to store energy for days when there is little wind or sunshine. Developments in battery technology offer new solutions for this problem, something Statkraft is following closely.

"We know that sufficient capacity and flexibility are prerequisites for continued growth in this market. We've not yet reached the point where solar and wind can fully replace coal and gas, but we're getting there."

“We see a boom in solar energy in the Netherlands right now. Statkraft is determined to participate in this growth.”