80 percent of all new cars sold in Oslo are now electric or hybrid-electric. The "Oslo model" for electrifying the country's car population has attracted international interest. Why can't other countries and cities just follow Norway and Oslo's example?

The main reason for the strong growth in the number of electric cars in Norway – especially in the cities – is a combination of carrot and stick. There are strong financial incentives for buying electric cars, and growing restrictions on the use of fossil cars.

Electric cars have enjoyed reduced registration fees, access to bus lanes, free parking and charging, and their owners pay reduced or no road tolls. If you have a fossil car, you have to pay ever higher road tolls, sky-high parking fees – if you find parking at all – and you may be prevented from driving in the city on certain days. More and more neighbourhoods are getting resident-only parking schemes, where electric cars can park for free while fossil cars have to pay high fees.

Can the revolution be replicated?

It is easy to think that other countries and large cities can just copy the Oslo model, but in practice it is likely not that simple. Ole Henrik Hannisdahl, general manager in Grønn Kontakt, a company that builds and operates charging stations for electric vehicles in Norway, thinks it may prove difficult to win acceptance in other countries for the extensive use of financial incentives and subsidies.

Grønn Kontakt is owned 96 per cent by Statkraft and has a strong interest in getting more electric cars on the roads. But it must be done properly.

"The Norwegian electric car policy is in practice a government-sponsored Norwegian experiment to show that it's possible to achieve a green shift in the transport sector," says Hannisdahl.

"The financial incentives have made it very attractive to own electric cars in Norway, and have also made it possible to build a good network of charging stations. Nevertheless, in the long-term the development must be commercially driven, both in Norway and elsewhere. People must want to switch to electric cars because it pays off, not because of tax exemptions or other special benefits."

Hannisdahl is convinced that the electric car will eventually win through without the use of financial incentives. Lower production costs, better batteries and more charging stations will make it increasingly attractive to choose an electric car.

"Norwegians don't buy electric cars because they are more environmentally-conscious than others, but because the cars are economical both to buy and own. In most other countries, electric cars are unreasonably expensive to buy. This is due to a combination of lower retail prices for petrol and diesel cars than in Norway, because other countries do not charge a vehicle import duty on cars and because production costs for electric cars remain high. Excluding the battery, which is relatively expensive, an electric car is much simpler than a diesel or petrol car. An electric car motor has few moving parts, is cheaper to manufacture and probably has a considerably longer life. Therefore I believe the price of electric cars will fall sharply and outperform fossil cars."

Grønn Kontakt was established in 2009 and has Statkraft as a major owner. After gaining experience in the development of charging stations and smart charging solutions in Norway, the company wants to expand the market to Europe as the number of electric cars also increases there. (Photo: Shutterstock)

In addition to the lower price of the car itself, charging infrastructure is crucial for an electric car revolution. Grønn Kontakt and other suppliers have gradually developed a fairly extensive network of charging stations across Norway, which has reduced "range anxiety" considerably in the central areas in and around the largest cities. But this network is based on a high density of electric cars.

"There are charging stations along all the main roads from Mandal in the south to Tromsø in the north, but use of these stations is still relatively low outside the densely populated areas."

Many have also worried that electric cars will overload the electricity grid, but Hannisdahl believes they will rather be a resource that gives increased flexibility.

"The use of smart technology and differentiated power pricing means that we will have a completely different view of power as a resource. When you arrive at your cabin on Friday night, you may be able to use surplus power from the car for light and heat, while solar cells recharge the car over the weekend so it is fully charged when you drive home again on Sunday afternoon."

Only the largest and most expensive electric cars currently have the battery capacity to carry the family all the way to the cabin in the winter – at least if it is more than a couple of hours drive away. To cover more needs and meet multiple market segments, batteries need to be even cheaper, lighter and more efficient.

"The batteries are expensive and demanding to produce, and there have been challenges with access to raw materials," says Hannisdahl, with reference to a recent debate on working conditions in cobalt mines in the Democratic Republic of the Congo.

"It's not the case that metals such as lithium and cobalt are rare and only found in countries such as the DRC. They are found in many places, but it takes time to build up capacity for extracting and refining them to meet demand. And they will cost more to produce in countries with higher wage levels and more respect for human rights and working conditions," he says.

However, Hannisdahl believes that today's batteries for electric cars are only "first generation", and that better alternatives will appear in just a few years.

"Today's batteries have some natural limitations in terms of both capacity and price. There are many different options on the drawing board, and in a few years we'll likely have new batteries that are both better and cheaper. This will lead to considerably cheaper electric cars in the future." 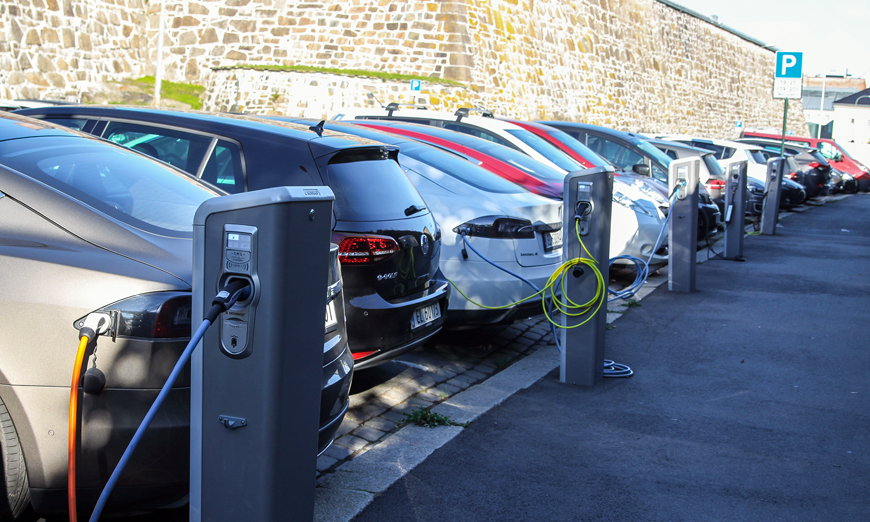 The density of electric cars is particularly high in the larger cities. The picture shows electric cars for charging in Oslo. (Photo: Shutterstock)

In the debate on the electric car it is sometimes suggested that the batteries are not only expensive, but also so energy-intensive to produce that they leave a greater climate footprint than fossil cars. Hannisdahl believes such claims are based on misunderstandings.

"Yes, the batteries are expensive and energy-intensive to produce, but they also have a very long useful life and will be attractive for recycling for many years – maybe decades – in the future. Although batteries do lead to greenhouse gas emissions during production, these emissions are small if you spread them over 30 years."

Life-cycle analyses show that electric cars, despite energy-intensive battery production, produce fewer emissions than fossil cars. This applies whether the electricity comes from clean renewable energy or from the European energy mix.

"The greenhouse gas emissions will of course vary depending on which energy sources dominate in the different markets, but the electric car always wins over the fossil car. If coal is still an important energy source in 20 or 30 years, we'll have bigger problems than where the electricity for electric cars comes from."

Hannisdahl also thinks it is wrong to look solely at emissions from the production and use of electric cars. One of the most important aspects of the electrification of vehicles is to shift the emissions from the car to the power plant. This is beneficial for both greenhouse gas emissions and for local pollution, and it also moves emissions from the transport sector into the European emissions trading system (ETS).

"There is no technology to remove greenhouse gases from fossil cars, but carbon capture from coal or gas power plants is possible. So centralising the emissions is in itself a step in the right direction. At the same time, the share of renewable energy production coming from water, wind and sun is growing," says Hannisdahl.

"It's obvious that neither they nor we can rely on transport solutions based on petrol and diesel. We must find renewable and clean solutions. The question is how fast the transition will go. In Norway, we may talk about an electric car revolution, but for the rest of the world it is more realistic to talk about an evolution."

Difficult to scale up

Grønn Kontakt has gained considerable experience in the rollout of charging stations and smart charging solutions in Norway, and the company wants to expand the market to Europe as the number of electric cars also increases there.

"The challenge is always scaling up to meet the numbers and needs of electric cars. New battery technology and greater prevalence of efficient and smart home chargers will change the need for charging stations, but we believe there will be a need for charging stations in places people visit for longer time periods, such as restaurants and shopping centres," says Hannisdahl.

He points out that population density in much of Europe is considerably higher than in Norway, so the distance to the nearest charging station will probably not raise the same concerns as here. On the other hand, the electric car can face other challenges in Europe than those we have in Norway.

"In Germany, people are used to driving pretty fast on the autobahn, and today's electric cars will face limitations there. If you drive at 200 km/h, even the largest Teslas will discharge after 45 minutes. If people are to continue driving that way, how are you going to provide sufficient charging capacity along the roads? We need to find answers to issues like these, too," says Hannisdahl. 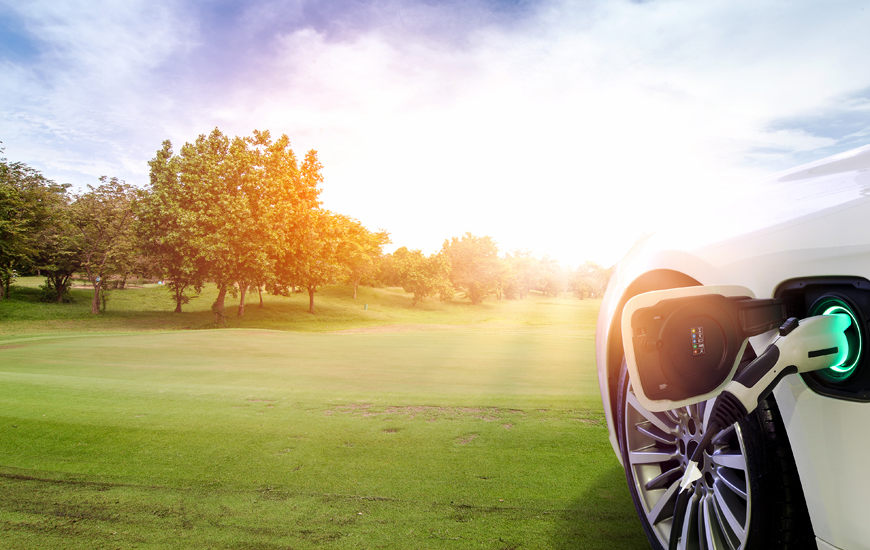 The greenhouse gas emissions will of course vary depending on which energy sources dominate in the different markets, but the electric car always wins over the fossil car. (Photo: Shutterstock) 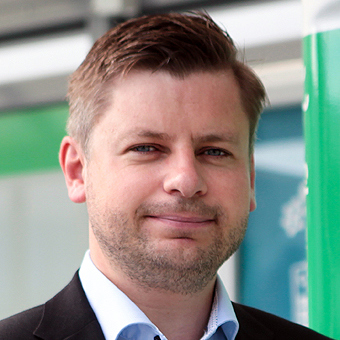 Ole Henrik Hannisdal is managing director of Grønn Kontakt, a Norwegian company that operates charging stations for electrical vehicles. The company is owned 96 per cent by Statkraft.

Electrification: "Electric cars are no more climate-friendly than ordinary cars!"