Climate change leads to more extreme weather with large amounts of precipitation over a short period. The reservoirs of hydroelectric power plants have proven vital in limiting flood damage.

In recent years it has become increasingly necessary to regulate the water level in the reservoirs due to extreme weather conditions.

Contrary to popular belief, spring flooding is not the biggest problem.

"We usually have control over that, because through the winter we regularly measure the volume of snow in the mountains. From this we get accurate forecasts of the inflow of melt water to the reservoirs and can implement necessary measures in good time. After the winter, water levels in the reservoirs are low, so there's ample room for the melt water," he says.

Intense rainfall in the autumn, with extreme amounts of precipitation over short periods, occurs more and more often and is much more challenging than spring flooding.

"After the melting season, the reservoirs have significantly higher water levels than in the spring. When we then get unpredictable and intense rainfall, it creates challenging situations," says Hønsi.

If the reservoirs don't have the capacity to dam up the rainwater, the rivers downstream will flood, which can cause major damage. That happened in the autumn of 2018 in Sogn, due to the large and simultaneous inflow of water from both heavy rains and melting of snow that had fallen shortly before. Unregulated watercourses were severely damaged and people were evacuated. In this situation, Statkraft's people were constantly out checking the water level in several rivers, including the Jostedøla River in Luster.

"When we saw that the water level had gone down a little in the rivers, we opened the gates and lowered the reservoirs. We continuously monitored the capacity of the rivers and evened out the water flow," says Hønsi.

This led to the fifty-year flood we were warned about being downgraded to a twenty-year flood.

"During the same autumn, thirty people were evacuated when the Mørkrid River in Luster flooded. The Jostedøla River is a larger watercourse than the Mørkrid, and there Statkraft regulates the reservoir connected to the Jostedal and Leirdøla power plant. We used all means available to us before and during the extreme rain storm, and we managed to handle the situation," he says.

If the autumn's first snowfall is followed by mild weather, the snow will melt at the same time as any heavy rainfall that occurs. Then a lot of water pours down the mountains and valleys at once, as happened in Sogn.

"These kinds of situations are difficult to control, but we try our best to be prepared. No one monitors the weather forecast as closely as the power industry – we're on the alert immediately if there's a risk that a dangerous situation can arise," says Hønsi. 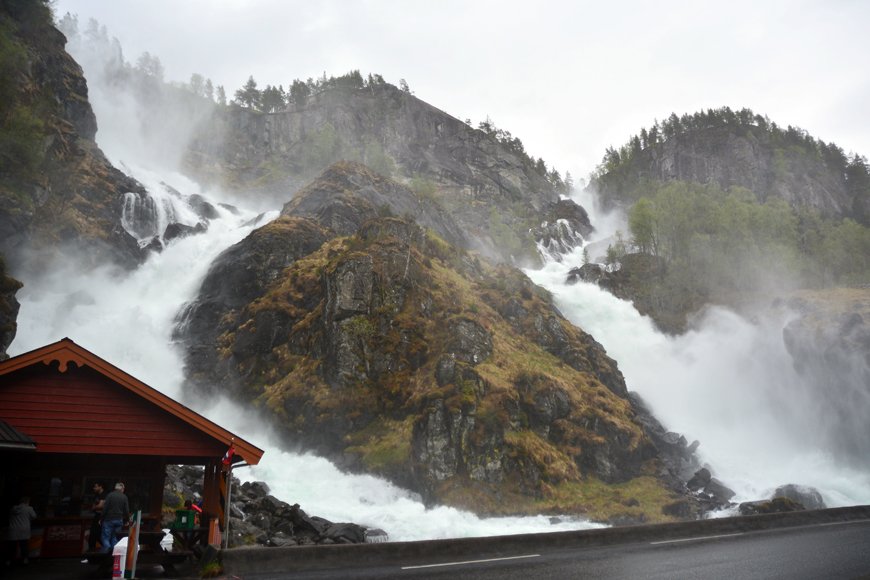 Låtefossen waterfall in Odda Municipality in Hordaland County is a major tourist attraction in Norway, not least when there is heavy water flow, as here in May 2013. (Photo: Statkraft)

The weather reports are plotted into Statkraft's models ten days in advance and monitored closely.

"When we're sure that a challenging situation is on the way, our focus shifts from financial optimisation to civil protection. Then we prepare to receive the expected quantities of water, for example by opening the lock gates and pre-emptively lowering the reservoirs," says Hønsi.

The storm Dagmar, which hit Western Norway and Trøndelag County on Christmas Day in 2011, caused a power outage for more than a million Norwegians, and the flood triggered damage claims for a record NOK 1.3 billion.

"Dagmar signalled the beginning of a significant change. After 2011, extreme weather events have become increasingly frequent. That has given us very clear indications that regulated power plants provide major savings for society. There are, of course, no guarantees. If the reservoirs are full when extreme weather hits, it's too late to do anything about it. The best situation is when the reservoirs have some spare capacity, then we have something to go on if we don't have time to lower them in advance," says Hønsi.

A report prepared by Multiconsult on behalf of Energy Norway shows that insurance settlements from floods have quadrupled in Norway after 2010, and that regulated power plants contribute to reducing flood damage payments by enormous amounts every year. An example in the report is the October flood that hit Western Norway in 2014. Damage in Flåm and Odda at that time cost more than NOK 0.5 billion, while there was no damage in the neighbouring watercourses Aurland and Tyssedal which are regulated.

"We're very aware that we are not allowed to exacerbate a natural flood, and we always focus on reducing the flood as far as our measures allow us. We quickly move to an emergency footing when we see that extreme weather is on the way. 2018 was an example of a year of great variations in the weather. An ice-cold winter was followed by an unusually warm and dry summer and a wet autumn. The forecasts indicate that we are going to have even wilder and wetter weather in the years to come, so there is no longer any doubt that climate change is a fact. So now we're talking not just about preventing climate change, but about adapting to it. Flood protection is one way to adapt, and our water reservoirs are excellent climate adaptation measures," says Hønsi.

Lake Bleikvatnet in Hemnes Municipality in Nordland County went over its banks in the summer of 2005. (Photo: Bjørn Grane)

In some cases environmental considerations conflict with flood protection.

"We are currently in a period of term revision, where old power plant licences are renewed and adapted to modern times. The authorities, in this case the Norwegian Water Resources and Energy Directorate, are concerned with ensuring minimum water flow to safeguard the environment in the rivers. This is challenging when consideration must also be given to flood control, because the risk of flooding increases when the regulator must retain more water in the reservoirs to ensure minimum water flow in the river. We end up storing more water than before, especially in the fall, and then the risk increases. The water level in the rivers will already be high, so there must be a trade-off between environmental protection of the rivers and the risk of damage to society as a result of flooding. To guarantee minimum water flow in dry years, we simply have to store more water, but fuller reservoirs can increase flood risk," Hønsi explains.

One thing is certain: for Statkraft, civil protection is always more important than the prospect of potential financial gain.

"We're very clear in this area. We acknowledge our social responsibility and notify the affected parties as well as we can when we see a challenging weather situation on the way. Although it's tempting to keep the reservoirs full, we never hesitate to lower them in advance, so they have more capacity to accept any rain that might come," says Kåre Hønsi.

In Norway, there are more than 1000 reservoirs, with a total capacity corresponding to about 70 per cent of Norway's power consumption.

According to the Norwegian Water Resources and Energy Directorate, Norway has half of Europe's reservoir capacity, and more than 75 per cent of its hydropower production capacity is adjustable. This means that hydropower production – unlike solar and wind power – can be adjusted by turning the 'tap' on or off as required.

The parliamentary white paper on energy policy, "Power for change", highlighted the importance of power plants in flood control: "The Government wishes to raise awareness of the contribution of hydropower regulation to flood control. Climate change makes this perspective more important than before."

Inflows to Norwegian hydropower can vary by 60 TWh per year: from 160 TWh in wet years to 100 TWh in dry years.

Hydropower: Safe energy in all weather

Energy production: The value of water

Feature: "When Synne came to Suldal"