The eel is an enigmatic, mythical and endangered fish. In Sweden, Statkraft and other hydropower companies are participating in a research and development programme to help the eel survive. The measures taken so far seem to be producing good results.

The eel has a peculiar existence compared to other fish. It lives most of its life in fresh water and spawns only once in its lifetime. When it does, it has to swim into the ocean and on to the Sargasso Sea northeast of the Bahamas. After spawning, the adult eel dies, while the young, or "glass eels" return to the watercourse from which the parents came. From the sea, they swim up the river to start a new cycle.

Glass eels that try to swim up regulated waterways will quickly encounter obstacles in the form of dams and turbines. That is why Statkraft organises the catch and transport of glass eels and adult eels in the Lagan River in southern Sweden. There are several power plants here, and the glass eels are caught downstream in the river and released again upstream of the power plants in selected areas where they have the opportunity to grow and mature enough to spawn.

In 2019, 260 kilograms of glass eels were caught and moved. This is equivalent to 260 000 glass eels and is almost ten times more than what was caught in the river ten years ago.

"We have to go back to the 1960s to find a similar number of glass eels in the river," says Henrik Jatkola, manager at Statkraft's power plants in Lagan River. He emphasises that it is difficult to say with certainty that the sharp increase is due to the measures taken by Statkraft, but that is nevertheless good news for the eel.

"Since 2011 we have also transported adult eels downstream past the power plants. We believe that it's their offspring now returning to the watercourse as glass eels," says Jatkola.

"In that case, this means that our transport of young and adult eels does not adversely affect the eel's natural migration pattern, but on the contrary, it helps the eel to complete its migration.

The glass eels caught and transported upstream in the Lagan River have put a long and dangerous journey behind them. They are born as larvae in the Sargasso Sea and spend two to three years traveling the Gulf Stream across the Atlantic. During the journey, the larvae are very vulnerable and many become food for other fish. Those who reach the coast in Europe have grown to become glass eels, of about six centimetres in length.

It is these eels that are caught and transported up the Lagan River to be released above the power plant. 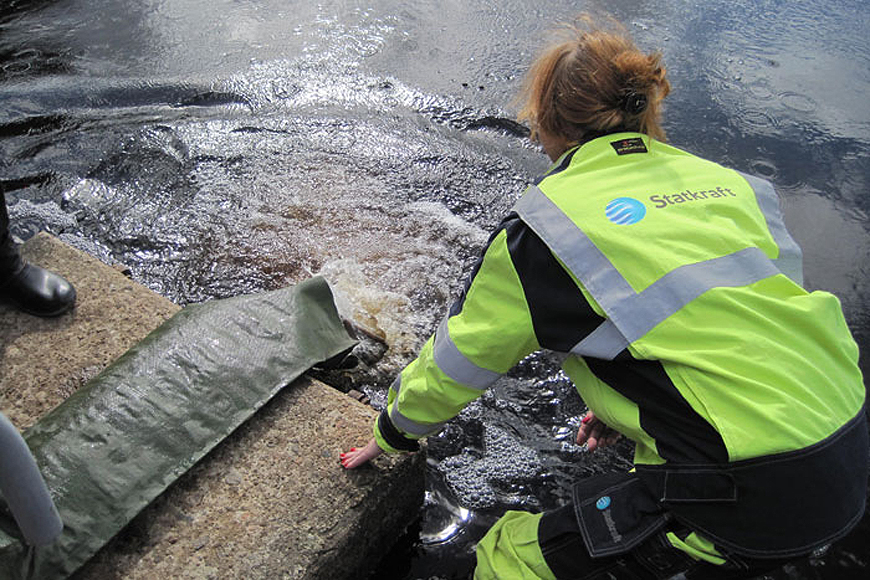 With a little help from good friends! The young and adult eels are carefully transported past power plants where turbine wheels and other obstacles can pose a hazard. (Photo: Statkraft)

Major effort on behalf of the eel

Catching and transporting glass eels upstream, and catching and transporting adult eels downstream, are measures implemented in connection with the programme Krafttag ål (Major effort for eels). The programme is a collaboration between the Swedish Sea and Water Authority (HaV), six hydropower companies and several research communities. The goal is to gain new knowledge about the eel and to implement specific measures that can help the eel overcome obstacles in the river. Statkraft has been involved since 2011.

The stock of European eels has fallen sharply in recent decades, and according to some estimates it may be reduced by as much as 90–95 per cent compared to the stock in 1980.

"The reasons for the reduction are unknown, but overfishing, environmental toxins, loss of freshwater habitat and climate change have been proposed as possible causes," says Erik Sparrevik, environmental adviser at Vattenfall Vattenkraft AB and board chair in Krafttag ål.

"We also know that dams and turbines connected to hydropower plants hinder the eel's natural migration. So it's important for companies operating power plants in rivers with a lot of eels to be involved in measures that can reduce the harmful effects. Krafttag ål has given us the opportunity to try out a wide range of measures at both large and small power plants," says Sparrevik.

It is the large hydropower companies that are participating in this effort, and they also finance the programme together with the Swedish Sea and Water Authority. 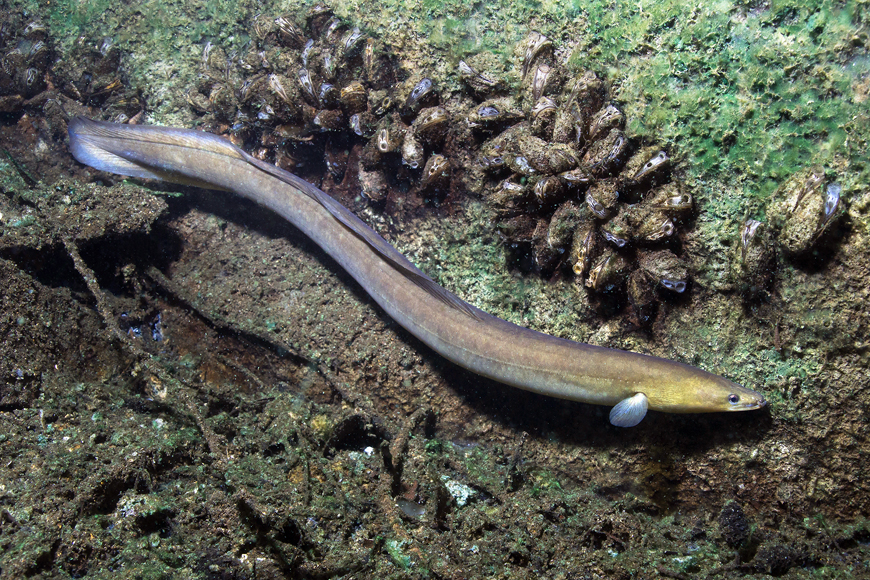 For some, the eel is just a rather slippery and strange fish. For others, it is a delicacy. Either way, the eel population is declining, and the species is endangered. (Photo: Shutterstock)

The research and development part of the programme has mainly focused on understanding the eel's behaviour and migration patterns, and gaining insight into how the operation of a hydropower plant can have as little impact as possible on the eel. The projects have provided new knowledge about possible technical solutions to help the eel on its way in the river.

"The solutions largely involve different types of grates that prevent the eel from entering tunnels and turbines, and physical diversions combined with passages past the power plant," says Sparrevik. He believes the challenges are quite different for small and large power plants.

"With large power plants it's probably necessary to catch and transport the young and adult eels past the power plant. At smaller plants, it's easier to take measures, – such as spillways where the eel can get around the power plant – without compromising operations. 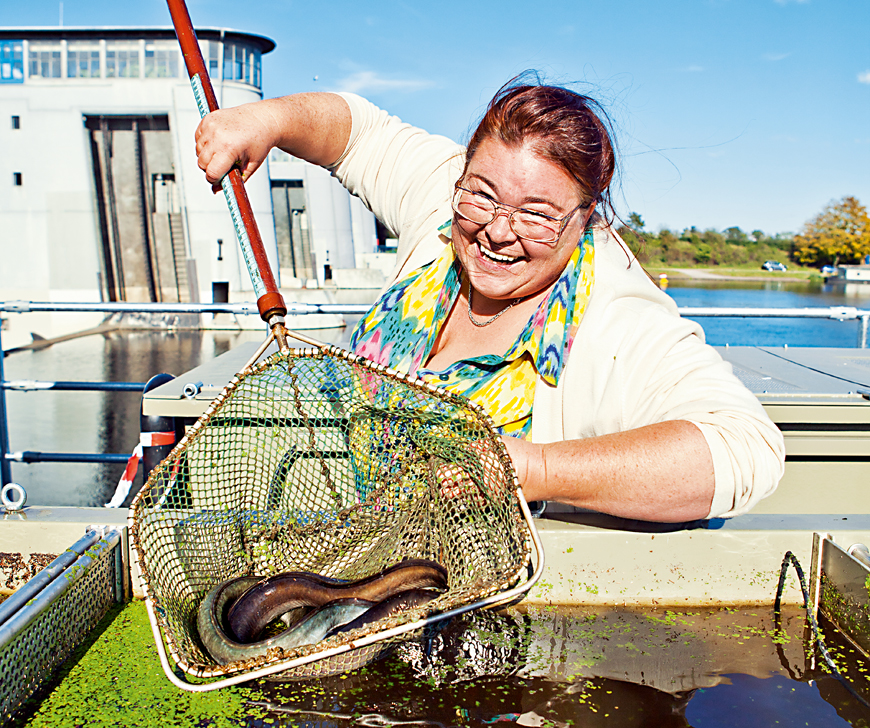 In Germany, Statkraft has established a transponder-based system as the basis for tuning turbine operations to protect eels at several of the company's run-of-river power plants. Eels with small radio transmitters detect changes in activity during the migration period and provide a signal to commence gentle turbine operation. The system, called Migromat, was developed by Dr. Beate Adam (pictured) at the German Institute of Applied Ecology. (Photo: Hans Fredrik Asbjørnsen)

When does the eel migrate?

The eel spawns only once in its lifetime, but can spend 10–15 years in a water body before one day it decides that now is the time to swim to the Sargasso Sea to spawn. But when does that happen? And is it possible to predict it? If we knew when adult eels were ready to migrate, in theory it would be possible to stop the turbines for a short period to give them free passage.

"Research is constantly being carried out to find out whether it's possible to predict when adult eels are ready to migrate. Static analyses and models show that currents, lunar phases and length of the day can play a role, but so far no findings have allowed us to predict the eel's migration with high accuracy," says Sparrevik.

"The eel has been surrounded by mysteries, and it looks like that will continue." 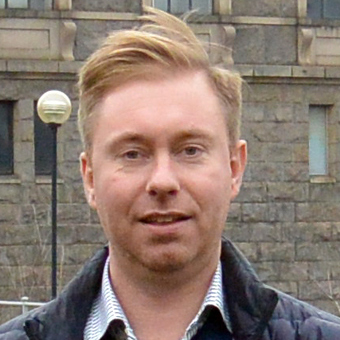 Henrik Jatkola is power plant manager in the Laholm power plant group in Sweden, responsible for the company's hydropower plants along the Lagan River in southern Sweden.

The European eel (Anguilla anguilla) is a fish with a long, slender body and smooth, thick skin. The female can grow up to 1.5 metres long, while the male rarely grows longer than 0.5 metres.

The eel spawns in the Sargasso Sea, and the larvae float on ocean currents to Europe. After two or three years they reach the coast of Europe and have become six to seven-centimetre-long "glass eels", which swim up the rivers. In fresh water the eel undergoes a new transformation into "yellow eel". It can live in the watercourse for 10-15 years before migrating into the sea and becoming a "silver eel" that swims with the ocean currents to the Sargasso Sea to spawn.

The European eel population has been reduced by 90–95 per cent since 1980. The causes are unknown, but human impacts in the form of overfishing, watercourse regulation and climate change, and natural phenomena such as fluctuations in the North Atlantic ocean currents and growth of the cormorant population, have been proposed as possible causes.

The eel today is a red-listed (endangered) species that needs to be protected.

Hydroelectric power stations with dams and turbines create obstacles for eels that need to migrate to the sea for spawning, and for glass eels swimming from the coast up the watercourse.

Krafttag ål (Major effort for eel) is a Swedish research programme in which research communities, hydropower companies and government authorities join forces to gain knowledge about eel behaviour and implement measures that can prevent or reduce injuries to eels. The programme started up in 2011.

Statkraft is one of six power companies participating in the initiative.

As eels are a seriously threatened species in Europe, Statkraft has special programmes to manage them in areas where eels have to migrate through the company’s project areas. This especially applies in Sweden and Germany. To develop appropriate measures that facilitate fish migration, an integrated approach combining expertise in fish biology, hydrology and engineering is necessary.

To reduce eel deaths and turbine damage, Statkraft is conducting experiments on "gentle turbine operation" at several power plants in Germany. This applies to power plants in the Weser, Werra, Fulda and Eder rivers, among others. There are several types of measures, such as changing the position of the turbine blades, lowering the speed of the turbines or completely shutting down one or more turbine to allow the eels to pass through.

The biggest challenge is knowing when to switch to gentle operation. The eel usually migrates sometime between August and February, but an exact time is difficult to predict. It is known that when eels are ready to migrate they become more restless, but to register this requires continual observation.

One solution Statkraft has adopted in Germany is to equip a small number of eels with small radio transmitters, called transponders, and monitor them. When the eels begin to show signs of restless behaviour, the radio transmitters trigger an alarm that signals that it is time to switch to gentle operation.

It is estimated that gentle turbine operation reduces the proportion of injured eels to between zero and two per cent. The cost is a loss of production of 3 GWh from a normal production of 206 GWh at Statkraft's German run-of-river power plants.